FREE BJJ Instructional Video: Learn How to Take Down Anyone in BJJ with These 7 Techniques!

There are many different martial arts styles in the world, and Brazilian Jiu Jitsu and Japanese Jiu Jitsu are two of the most popular.

While they share some similarities, there are also some key differences between these two styles. In this blog post, we will discuss the difference between Brazilian Jiu Jitsu and Japanese Jiu Jitsu.

Jiu jitsu is a martial art that originated in Japan. It is thought to have been developed from the techniques of earlier martial arts, such as samurai warfare and grappling.

The first recorded mention of jiu jitsu dates back to 1532, in a book called "Records of the Unified State of Wei."

Jiu jitsu was later mentioned in several other Japanese texts, including the "Buke Myosho," or "The Martial Arts Guidebook."

The first formal school of jiu jitsu was founded in 1882 by Jigoro Kano. Kano's system, which he called Kodokan Judo, is still practiced today.

Jiu jitsu remained largely unknown outside of Japan until the early 20th century. In 1904, a Japanese judoka named Mitsuyo Maeda traveled to Brazil, where he taught the art to Carlos Gracie.

While Japanese jiu jitsu and Brazilian jiu jitsu share many of the same techniques, they have diverged in some ways after more than 100 years. Here are some of the differences between them:

First, there are some subtle differences in the training methods used in Brazilian Jiu Jitsu and Japanese Jiu Jitsu.

The focus of Brazilian Jiu Jitsu also places more emphasis on ground fighting, while Japanese Jiu Jitsu includes more stand-up techniques and some dojos also include training with classic japanese weaponry such as the katana.

Both methods have their advantages and disadvantages, but ultimately it is up to the individual student to decide which style of training works best for them.

In Brazilian Jiu Jitsu, points can be scored for taking an opponent down, sweeps, achieving a dominant position, and submitting an opponent means an automatic victory regardless of the points being accumulated between the competitors.

In contrast, Japanese Jiu Jitsu matches are typically won by either throwing or pinning an opponent.

In some Japanese Jiu Jitsu competitions, submitting your opponent does not always mean victory. A submission can be counted as points and then the match restarted until the time expires to see which competitor accumulates the most points.

You get a new belt when your professor thinks that your skills and attitude have met the standards required for a promotion.

The belts go in this order for adult practitioners: white, blue, purple, brown, and black.

Beyond the black belt level, if a practitioner decides to dedicates his/her life to teach, then he/she is eligible to receive stripes on the black belt and achieves the next ranks of coral-red-and-black belt, coral-white-and-red belt and finally the red belt or also known as the 9th degree black belt, the highest rank possible in Brazilian jiu jitsu.

In Japanese jiu jitsu ranking is also done by belts but they are slightly different from those of Brazilian jiu jitsu.

The belt rank in Japanese jiu jitsu is very similar to that of Brazilian jiu jitsu if someone starts training as a kid or a juvenile.

Like in Brazilian jiu jitsu, Japanese jiu jitsu practitioners can also achieve the red belt rank if they decide to dedicate their lives to teach the art.

Which one is better?

Some people may prefer one over the other, but in the end it really comes down to personal preference. Both styles have their own benefits and drawbacks and it ultimately depends on what you are looking for in a martial art.

Both Brazilian Jiu Jitsu and Japanese Jiu Jitsu are great martial arts with a lot to offer.

It really comes down to what you are looking for in a martial art and which style better suits your needs.

Whichever you choose, you are sure to benefit from the training and discipline that these martial arts provide. Train hard, stay safe, and enjoy the journey!

Hans David
« Previous Post 10 Mistakes to Avoid as a New BJJ White Belt Next Post » McDojo Warning Signs: How to Spot a Martial Arts Gym That’s More About the Money Than the Martial Arts 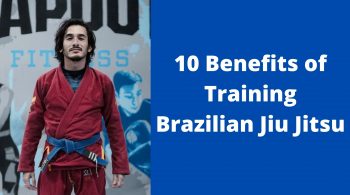